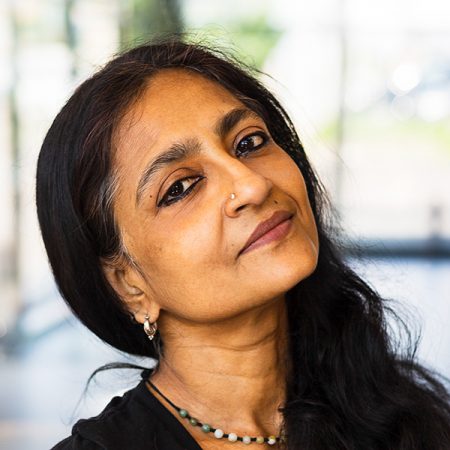 Ananya Chatterjea/ অনন্যা চট্টোপাধ্যায় ‘s work as choreographer, dancer, and thinker brings together Contemporary Dance, social justice choreography, and a commitment to healing justice. She is the creator of ADT’s signature movement vocabulary, Yorchhā, and the primary architect of the 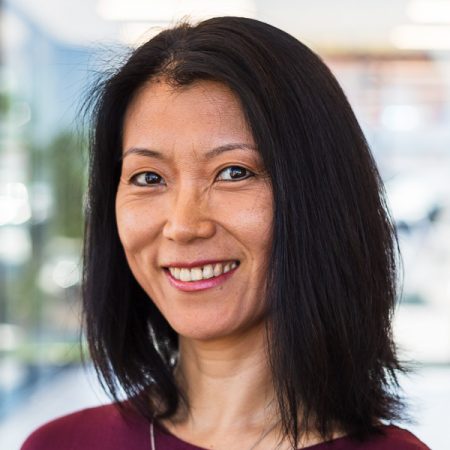 Hui Niu Wilcox, Ph.D., has been moving and thinking with Ananya Dance Theatre since 2004. She is a Professor and Chair of Sociology at St. Catherine University. She also teaches in Women’s Studies and Critical Studies of Race/Ethnicity. Hui is grateful for the privilege of engaging in activism through dance, and for the loving support of her family and friends, especially Elliot, Claire, and Lynn. Hui is co-editor, 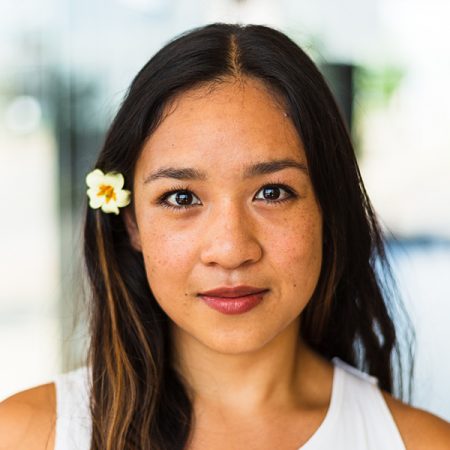 Kealoha Ferreira is a Native Hawaiian, Filipino, and Chinese dance artist from Oʻahu, Hawaii now residing in Mni Sota Makoce. Interweaving the embodied, transnational feminist practices of Yorchhā and Aloha ʻĀina, she creates work that explores relationality, reclamation, and continuum through an 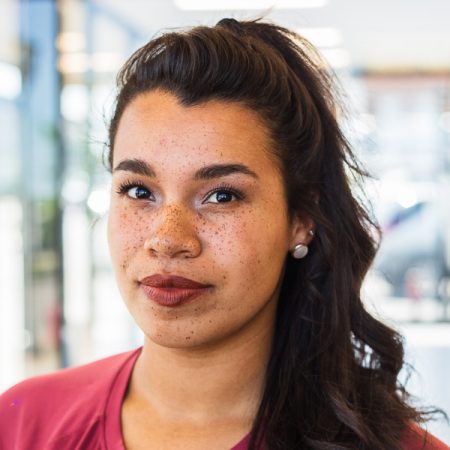 Alexandra Eady entered into the space of Ananya Dance Theatre at the age of 16. The company’s commitment to social justice and intentional choreographic creations are what fuel her performance onstage. Alexandra teaches Yorchha workshops and master classes in schools across the Twin Cities metro area as well as nationally and internationally while on tour with the company. In 2020, 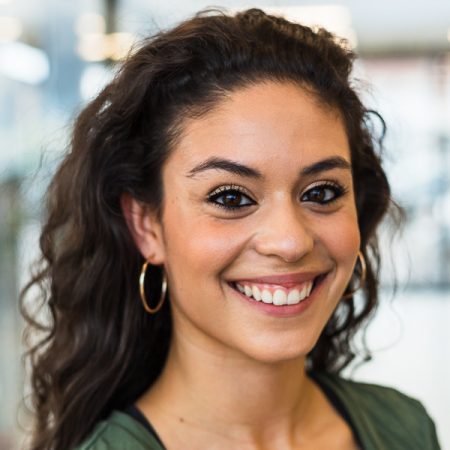 Lizzette Chapa is a Mexican-American dancer and dance maker originally from The Rio Grande Valley, Texas, now residing in Mni Sota. She graduated from the University of Texas at Austin with a BFA in Dance in 2017. She is deeply drawn to the company's commitment to social justice issues, radical healing, and ancestral guidance. She is currently a movement instructor in the Twin Cities, utilizing the principles of 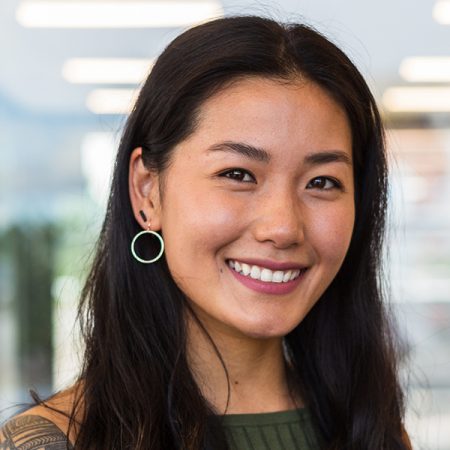 Laichee Yang is a multi-disciplinary designer and artist who makes drawings, graphics, interactive installations, and photographs for digital and physical spaces. She is honored to have worked with organizations that include Ananya Dance Theatre, Indigenous Roots, Brownbody, and Fendika Cultural Center. Laichee is currently a master of architecture student at the University of Minnesota. 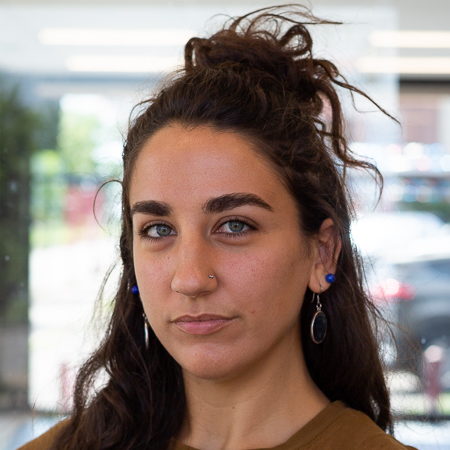 Noelle Awadallah نوال  is a Palestinian-American improviser, performer, and dance maker who resides in Mni Sota. She graduated from Columbia College Chicago in 2018 with a BFA in dance. She joined Ananya Dance Theatre in 2019 and since has been fueled by the company's unwavering dedication to social justice issues and storytelling. Her personal 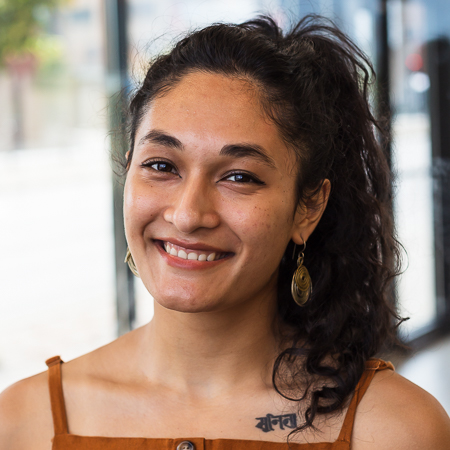 Parisha Rajbhandari (she/her) is a Newari-Nepali dance artist residing in Mni Sota. Parisha explores movement through her Newa identity interconnected with multiple folk-dance traditions in Nepal. She grew up immersed in social dances and continues to participate and learn through the social dance community in the Twin Cities. She received her BA in dance from Minnesota State University, Mankato in 2020, and is furthering 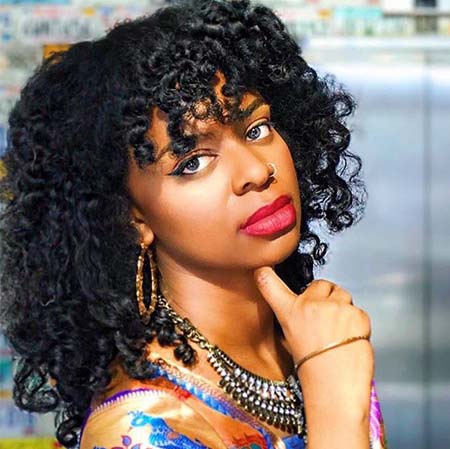 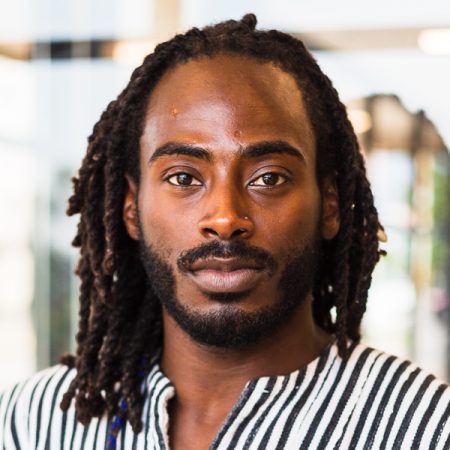 Orlando Hunter is a choreographer who researches, illustrates and creates from an African-American male perspective. In his work he tackles issues resulting from a capitalistic imperialist patriarchal white supremacist system. Hunter grew up dancing hip-hop and graduated with a BFA in Dance from Univ. of Minnesota, where he performed works by Donald Byrd, Bill T. Jones, Carl Flink, Louis Falco, 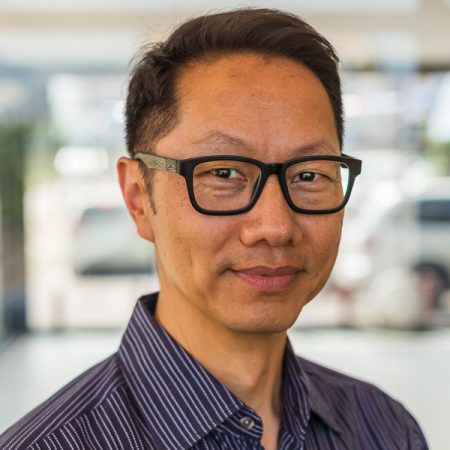 Marcus Young 楊墨 is a behavioral and social practice artist making work for the stage, museums, and the public realm. He is a recipient of awards from the McKnight, Bush, and Jerome Foundations. He is founding artistic director for Don’t You Feel It Too? — an ongoing participatory street dance practice of social healing and inner-life liberation. 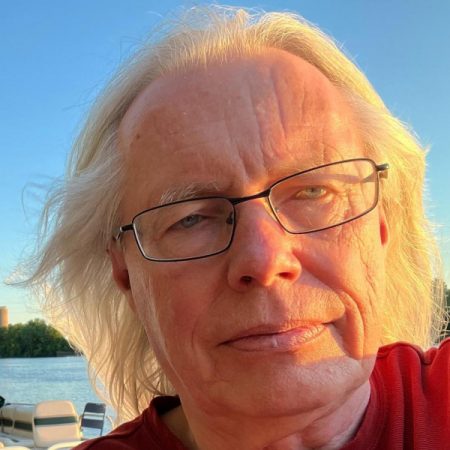 Managing Director and Board Secretary

Gary Peterson (he/him/his-they/them/their) has been a part of Minnesota’s dance community for more than 40 years. In addition to his work as managing director of Ananya Dance Theatre and research collaborator with Dr. Ananya Chatterjea, he has served as dance student, consultant, and as executive director of James Sewell Ballet, Zorongo Flamenco Dance Theatre, Zenon Dance Company, and the Southern Theater. He has 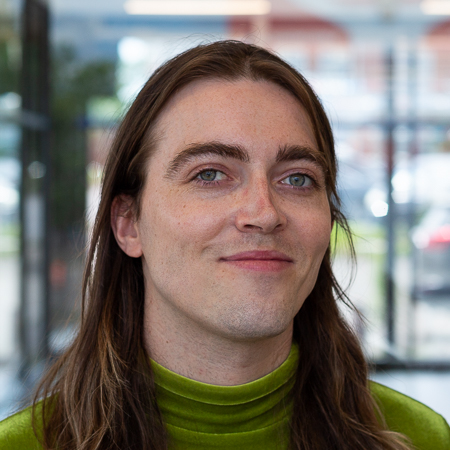 Cameron Alosa (they/them) is a multidisciplinary artist originally from New Hampshire (aka N’dakinna, the land of Abenaki Peoples past and present), now residing on Dakota Land in Mni Sota. Their work explores forgotten histories and speculative futures via archival research, visits to sites of mourning and celebration, and allegorical storytelling. They graduated from the Rhode Island School of Design in 2020 with a BFA in Sculpture. They joined Ananya Dance Theatre in 2022, inspired to uplift the critical artwork of Ananya Chatterjea and all of the artists at ADT. 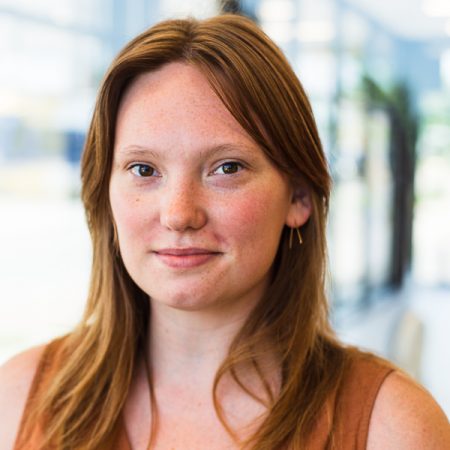 Emma Marlar, originally from Kenosha, WI, resides in the Minneapolis area, balancing a career in the performance, creation, and technical aspects of dance. Since graduating from the University of Minnesota - Twin Cities with a BFA in Dance in 2016, she has made space and taken on work that allows her to support others, spark conversation, create collaboratively, and pursue endless

Jessie Storovich is excited to be working with Ananya Dance Theatre, for the first time this season. Jessie previously worked as the Director of Operations and Productions for The Lab Theater in downtown Minneapolis. She currently works as a Producer/Production Manager for several arts, entertainment, & commercial organizations. Jessie is also the Owner/Creator of RatHaus Inc. & CABARAVE. Jessie believes in the importance of art and feels blessed to live in a community full of truly brilliant artists and creators! Photo by Laichee Yang 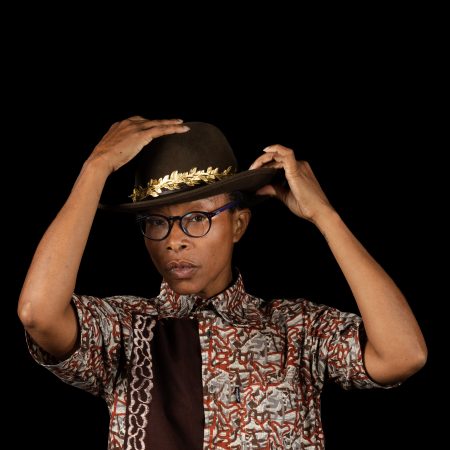 Spirit McIntyre (spirit/they/them) is a Cellist, Vocalist, Lyricist, Reiki Practitioner, Compassionate Facilitator, and Visual Artist who promotes empowerment and healing by any medium necessary. They believe in: the importance of breath, the power of deep listening, holding space for complex emotions, healing intergenerational trauma, honoring lovability, and growing compassionately through 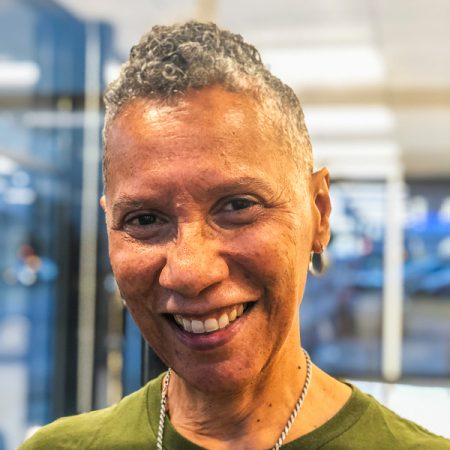 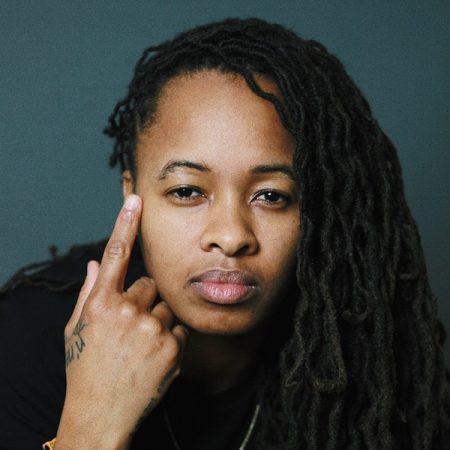 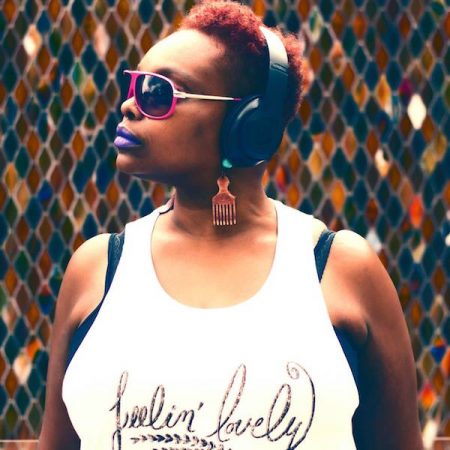 Andrea (Queen Drea) Reynolds, recipient of a 2017 Minnesota Emerging Composer Award administered by the American Composers Forum, is a vocalist, performance, and soundscape artist whose pieces are often conceived and created under the auspices of improvisational settings. Queen Drea has created work about depression in the Black community for Intermedia Arts, and about the 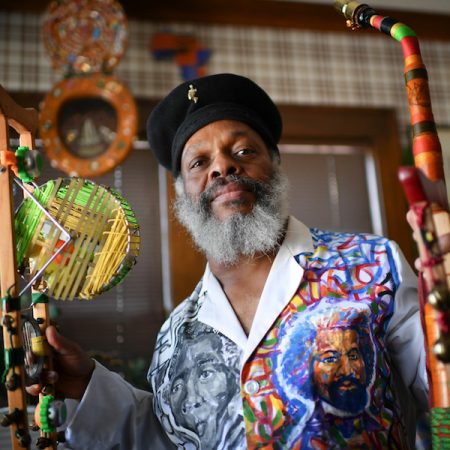 The polymathic Douglas R. Ewart has been honored for his work as a composer, improvising multi-instrumentalist, conceptual artist, sculptor, mask and instrument designer, builder and more. As an educator, Ewart bridges his kaleidoscopic activities with a vision that opposes today’s divided world by culture-fusing works that aim to restore the wholeness of communities and their members, 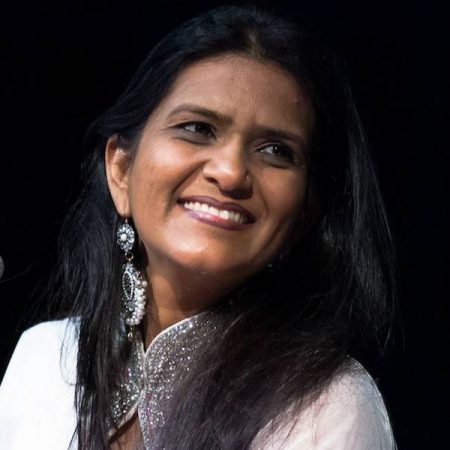 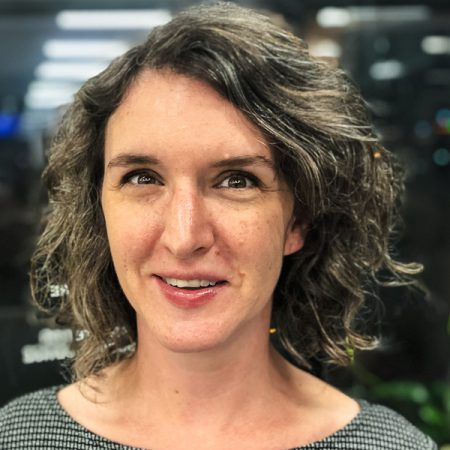 Chelsea M. Warren is a multidisciplinary theater artist with a focus on scenic and puppet design with an equal interest in both traditional and devised creation processes. This is her third project with Ananya Dance Theatre; previous works include Shaatranga, and Sutrajal. Having grown up in the Adirondack Mountains, Chelsea is drawn to robust, elemental stage pictures and is

Kevin A. Jones has worked in the professional dance and theater community for nearly 40 years. He was resident lighting designer and production manager for James Sewell Ballet for 20 years. His designs have illuminated internationally acclaimed ballets such as Moving Works, Barrage, Appalachia Waltz, Your Move, and Guy Noir: The Ballet. Jones designed for Minnesota Dance Theatre, CAAM Dance, SOLO, The McKnight Dance Fellows, and many

Darren Johnson is proud to have collaborated with Ananya Dance Theater for more than 15 years, traveling from Kolkata to Maui with interdisciplinary projects.  A writer and video producer whose work runs the gamut from documentary to experimental, he has tackled tough issues like implicit bias and diversity in the legal profession; aided and spotlighted innovation in the arts; and is currently producing a documentary about ADT, finishing a spoken word audiobook, and

Dameun Strange is a sound artist, multi-instrumentalist, and composer whose conceptual chamber works, choral pieces, and operas are focused on stories of the African diaspora, often exploring afrofuturist themes. Strange is compelled to express through sound, music, and poetry, the beauty and resilience of the Black experience, digging into a pantheon of ancestors to tell stories of triumph while connecting the past, present, and future. His sound

Greg Schutte is a composer, drummer, producer, and sound designer. As a touring drummer, Schutte currently plays with Grammy Award winning singer/songwriter Ryan Bingham. He has performed nationally and internationally with a variety of other artists, including Chastity Brown, Todd Clouser's A Love Electric, The Hornheads, Jelloslave, Lori Line, Anthony Cox, Empire Brass, Chuchito Valdez, Bernard Allison, and more. He performed on

Michelle Kinney, cellist, serves as Musician In Residence on the faculty of the University of Minnesota Dance Program. She holds a BA in cello performance, composition, and ethnomusicology/jazz studies from Northwestern University, and an MA in Performance Studies from New York University. Michelle is a grateful recipient of a 2014 McKnight Fellowship in Composition and a MRAC Next Step Fund Award. Her career has also been supported by the Bush Foundation, American