The National Performance Network (NPN), including the Visual Artists Network (VAN), is a national organization supporting artists in the creation and touring of contemporary performing and visual arts. 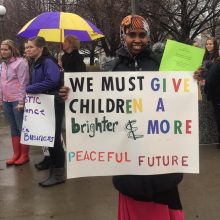 “Shyamali” is an evening-length dance work created by ADT and inspired by the ways that women across the world repeatedly talk back and embody dissent against injustices, despite daunting consequences.

“Shyamali” will receive its world premiere performances at The O’Shaughnessy in September 2017.

Weaving movement with text, speech, breath and song, “Shyamali” will create a rich, multi-lingual performance celebrating the histories and stories of women’s courageous acts that may have slipped through the bonds of public memory. The metaphorically staged, juxtaposed stories in this work will be choreographed in Yorchha, the company’s unique vocabulary of contemporary Indian American dance, and will be produced through collaborations with several design artists.

The creation of “Shyamali” will proceed through a community-engagement process and will incorporate several strategies for audience engagement during the performance.

Support for the research and development of new performances is rare, and funding sources often require artists and presenters to define new works before that process has even begun. The Creation Fund was established to provide direct and unencumbered assistance to the process of creation and to encourage others to do the same.

The NPN Creation Fund contributes a minimum of $13,000 directly to artists toward the commissioning of new work. NPN Partners apply for Creation Fund support for projects by artists who live either outside or inside the initiating NPN Partner’s community. This flexibility encourages NPN Partners to work with emerging artists in their own communities while introducing and promoting these artists’ work to the NPN Partners at large.