Ananya Dance Theatre came together in 2004 as an ensemble of women artists of color who were interested in exploring possibilities of bringing together dance and activism.

Simultaneously, inspired by the politically charged “group theatre” tradition of Kolkata, where she grew up, and the intricate beauty and power of the classical dance form Odissi, which was her primary training, Artistic Director Ananya Chatterjea issued a call to Twin Cities communities and women artists. Her exhortation to women artists of color to come together to dance about their dreams elicited a powerful response and ultimately led to the company’s founding.

Many of the founding women shared similar experiences of marginalization within the world of concert dance. All were committed to crafting a responsible artistry that was invested in building community and organizing. They were also responding to personally felt needs to create alliances with other artists of color across differences of race, nationality, and class, and to stand together on a shared forum. 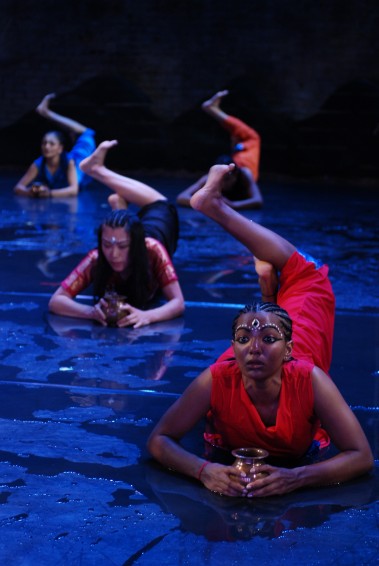 Early on, a leadership group emerged organically and shared the labor of writing grant applications and organizing logistics of performances. This steering committee, comprised of founding company members, formalized the ensemble’s structure and establishment as a non-profit corporation in 2005.

Chatterjea began evolving a movement vocabulary and crafting a pedagogy that would create a shared artistic platform for dancers who came from different backgrounds and trainings. At the same time, conversations among the dancers revealed interest in and need for constant “research,” investigations into the untold or little-known stories of women from global communities of color. The sharing of this research within our ranks led to a collectively shaped and committed vision of the world to which we aspired through our dancing. It also established a specific creative process for the company, one where the themes and narrative arcs of projects emerged through a process of research, discussion, and debate.

By the end of 2006, our focus had shifted outward, reaching to extend our community and explore issues that were part of our daily lives. Thus evolved our methodology of sustained exploration of themes in multi-year projects: the trilogy on environmental justice, the quartet of works exploring women and systemic violence, and the quintet of dance pieces exploring women’s work.

After a decade of continuous work, what remains vital in the company’s work is the commitment to a nuanced sense of artistry and to a process that is vigilant about social justice. Our artists identify as “cultural activists,” movement artists who claim a stake in shaping our future. It has since become increasingly important to our process to invite audiences into our work, to join the movement that fuses art and social justice, and to respond to our daak/call to action.

Inspired by the Occupy Movement, Chatterjea has framed the daak in terms of #occupydance, inviting audiences to embody movement as a mode of civic action. We believe that the intentional embodiment of gestures and moving with people from different walks of life teaches us a way of working collaboratively without infringing on others and models a sustainable way of living.

This way of working has lead ADT in the last several years to develop two kinds of performances, and dancing in at least two different kinds of venues: performances at concert halls where we can realize fully produced theatrical visions, and less produced performances at outdoor and less formal venues, where perhaps dance might not typically be seen, but which creates great access for different audiences. Our goal is to bring together concert dance and participatory art throughout the United States and around the world.

ADT also celebrates its legacy of collaboration with a series of talented artists, particularly from global communities of color. Over the years, we have had the opportunity to grow as we have worked with activists, organizers, dreamers, and artists from a range of disciplines, whose support of our vision has enriched our process.