Beyond tradition: The practice of sadhana in Odissi dance  (Part 1 of 5)

Based on fieldwork in sites such as New York and Bhubaneswar, this article examines how a group of dancers work within and beyond the traditions of Odissi dance as a way to expand the existing repertoire or margam (literally, pathway). How are new works produced and what constitutes innovation in a dance form that is frequently identified as a traditional one? This article argues that tradition(s) function as an interlocutor that dancers engage with continuously and dynamically to create innovative work. This innovation is accomplished via the daily practice of sadhana, such that innovation becomes an embodiment of that effort. By exploring Odissi through the embodied knowledge of its practitioners and their sadhana, this article provides an alternate way to understand a dance rooted in a ritual form, now performed on a global stage, in the language of the humanities and social sciences.

In her article ‘Dancing off-stage: Nationalism and its “minor practices” in Tamil Nadu’, Kalpana Ram (2009) argues that there are two fundamental weaknesses in dance scholarship. She describes the first weakness as follows: ‘Yet for all its insights into the political construction of gender and nationhood, this body of work betrays a singular imperviousness to the aesthetics or the embodied experience of dance or performance’ (Ram 2009). The second weakness Ram identifies is that ‘we have not sufficiently allowed Indian dance and performance traditions to inform our epistemology and methodology in the social sciences and humanities’ (2009). In short, we have much to learn from these performance traditions that have emerged within the Indian context, and these weaknesses continue to be a challenge for scholars writing about embodied practices. Odissi, especially in recent years, has transformed dramatically from a ritual form to a transnational performance. It has changed to accommodate new contexts and audiences, and continues to do so. Although this change is evident from its history, change is also built into a cultural understanding of the tradition and practice of Odissi. The notions of tradition these dancers employ is distinct from western ideas that often suggest fixity and stasis. Consequently, for many Odissi dancers terms like ‘traditional’ and ‘contemporary’ become a site of debate as these dancers present their work to non-Indian audiences and increasingly globalized Indian audiences.

I analyse the work of some dancers who work within the traditions of Odissi dance as a way to expand the existing repertoire or margam (literally, pathway) of Odissi dance, and yet must negotiate their innovation with Odissi traditionalists and new audiences abroad. Many of these dancers describe tradition via metaphors of nature, such as rivers and streams. Their ideas of tradition and their resultant innovation reflect the fluidity of these metaphors, such that the new works they create become strategic sites to explore the politics of the form. As Odissi has become increasingly globalized, there has emerged a tension between varying notions of tradition, and a need to maintain fixity even though the history of Indian dance has always been fraught with anxieties about maintaining the authenticity of traditional forms. I argue that tradition(s) and how dancers engage with them contributes to the broad variance of the dance as it is performed and practiced today, and their individual engagement with these varying notions of tradition is what fosters innovation. Tradition(s) thus function as an interlocutor that dancers engage with continuously and dynamically to create innovative work that is accomplished through sadhana/daily practice such that innovation becomes an embodiment of that effort.

This article is part of a larger, multi-sited ethnographic study conducted in New York, New Delhi, Kolkata, Khajuraho, Alexandria, Virginia and Bhubaneswar from 2005 to 2009 and with a research population divided into three categories: dancers (gurus, students and performers), critics (dance critics and writers), and bureaucrats and presenters (government officials and organizers). For this article, I focus my work on dancers in India and the United States who travelled between the two countries, as well as dancers who did not (or could not). Like the dancers I study, my location too is a shifting one, and I have researched these dancers as a practitioner/academic and colleague as I step into the boundaries between ‘diasporic’ Indian and ‘native’ Indian and embody the complementary sides of practitioner and scholar. 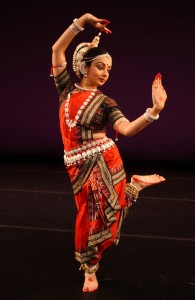 A brief history of Odissi

Odissi, one of eight Indian ‘classical’ dances, was officially codified in 1958 through the formation of Jayantika, a group of gurus and scholars who came together in the mid-twentieth century. However, this fact is often elided in historical and national narratives of the dance that invoke a seamless trajectory back to antiquity citing both sculptural and scriptural evidence. The Odissi of today is described as drawing on the traditions of the maharis, the female temple dancers, and the gotipuas, male dancers. The maharis participated in temple rituals as early as the ninth century ad, and their presence continued until the sixteenth century. By the twentieth century, the practice of their dance had declined and they found it extremely hard to survive. The gotipuas, who performed dressed as women, came into existence during the seventeenth century. Unlike the maharis, they were not affiliated with the temple but with akhadas/gymnasiums. The practice of this form of the dance moved to the akhadas and its practitioners also became known as akhadapilas or boys of the akhada. Although the gotipuas came to be associated with temple events and Vaishnavism through their song and dance, unlike the maharis they never performed inside the temple (Chatterjea 2004: 148).

The British eventually took over the management of Jagannath temple in 1803. According to Patnaik, this time marked the beginning of the maharis’ association with ‘concubinage’, largely because the temple, which provided stipends for the maharis, ceased to do so and these women had to look elsewhere for employment. This led to a shift in the spiritual and psychic home of Odissi, and also effectively removed the maharis from the centre of Odissi dance and performance. On the one hand, they enjoyed special privileges such as access to the temple, and a sexual freedom that other women at the time were denied. On the other, with limited royal and temple patronage, and with increased involvement by the British in temple affairs, they were subject to a decline in their lifestyles (Chatterjea 2004: 149). As moral policing increased, their way of life became more penurious and unsustainable. Without a steady income, the maharis were forced to rely on other means, which sometimes meant sex work.

Many of the gurus who were part of Jayantika were originally gotipuas and part of jatra groups (street theatre). Notably, even though many of the gurus who participated in the reconstruction of Odissi were trained as gotipuas, they fashioned the form of the solo female dancer after the tradition of the maharis; the actual maharis, however, were excluded from the dialogue during the Jayantika revival and reconstruction. It is ironic that the mystique of the mahari was exploited and perpetuated even though she was excluded from the project of reconstruction. By drawing on the evocative tropes of the mahari dancer, the claim to authenticity becomes historically validated and spiritually sanctified, for it is considered closer to antiquity and spirituality than the more recent gotipua tradition. By doing so, it builds on the fetishization of a female form that forwards a more hetero-normative perspective of the dance than that of the gotipuas. The erasure of the old and arthritic maharis was a necessary step in the consolidation of the romanticized image of the mahari; middle-class and upper-caste female Odissi dancers with their male gurus reworked the image of the mahari and the ‘new’ national female dancer came into being, one who was able to cross regional and local barriers. Compared to the maharis who were excluded from the revival completely, these women became cultural representatives of Odissi and the nation. Gender coupled with the privilege of class (and the accompanying perquisites of dress, access, language and geographical location) allowed for these women to take Odissi into a new arena.

Jayantika was responsible for the fixing of the Odissi margam, the developmental pathway of Indian ‘classical’ dance. Jayantika members decided the sequence and number of dances that count towards an evening-length recital, indicating a shift towards a western concert format. The original mahari version was about ten to fifteen minutes of uninterrupted ritual during which they would dance and sing. The Jayantika group codified a full Odissi recital to include five dance items that mirrored the entry into a temple, which began at its outermost premises and culminated at the inner sanctum. Similar to the items prescribed in Bharatnatyam, the pieces in the traditional margam, even today, are as follows: Mangalacharan,7 an opening prayer to the presiding deity, followed by a pure dance rhythmic piece called Batu Nritya or Sthayee Nritya. Pallavi, a rhythmic item, is set to a particular raga, and followed by an abhinaya, or mimetic piece. Another dance item combining abhinaya and nritta, for example a dance like Dasavtar, which describes the ten avatars of Vishnu, follows the abhinaya. And then Moksha, a final culmination of the performance that represents the merging of the dancer with the divine. It is this margam that is considered to be the correct and authentic version of Odissi, even though it is a significant departure from the Odissi of the maharis.