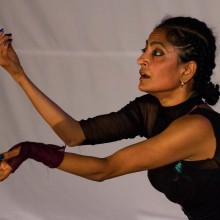 The Institute is directed and curated by Makeda Thomas. As a dancer, Thomas performed internationally in the companies of Ronald K. Brown/EVIDENCE, URBAN BUSH WOMEN, and Rennie Harris/ Puremovement. She began her study in Brooklyn, New York with Michael Goring and Eleo Pomare, continuing on scholarship at the Martha Graham School of Contemporary Dance, The Paul Taylor School and Hofstra University where she earned a B.A. in Dance and English. She holds an MFA in Dance from Hollins University. Thomas continues to create and perform internationally, while living in New York City & Port of Spain.